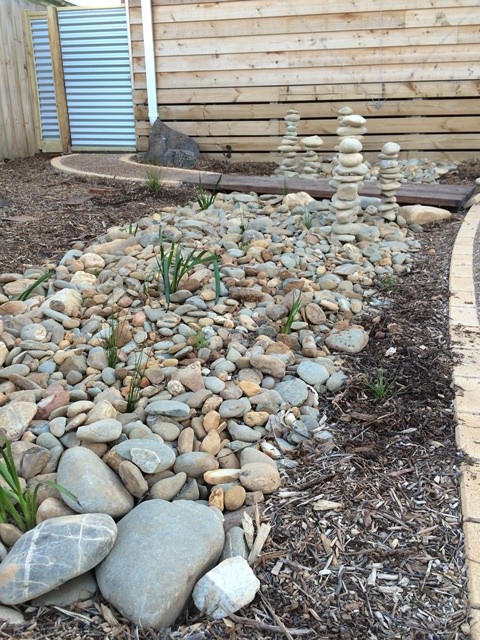 Water in the garden can be a blessing and a curse. While it’s great for plants, when it gets under houses it’s not so helpful. When we took on this job on a sloped property in Geelong one of the first issues identified was the water coming down the hill and under the house. One option would have been to put in a perforated agricultural drain pipe (agi-pipe) and divert the water into the storm water network. With the clients blessing we chose to make a feature rain garden in front garden. Rain gardens help treat and slow the flow of water before it gets into storm water systems and local water ways. Installing a rain garden also enabled the water to be accessible to the new tree planting in the front garden. 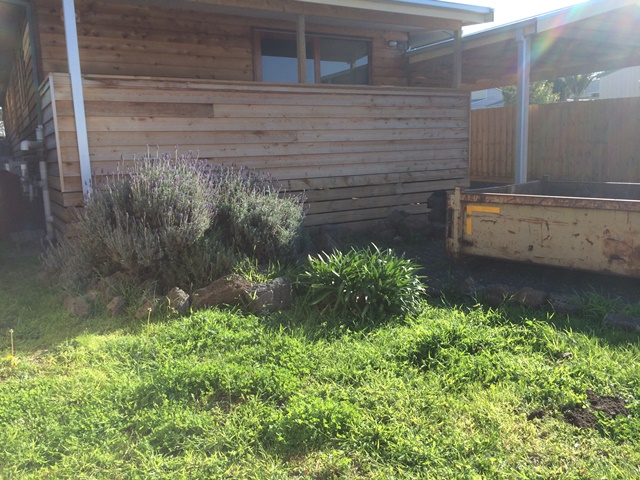 The site before we started work 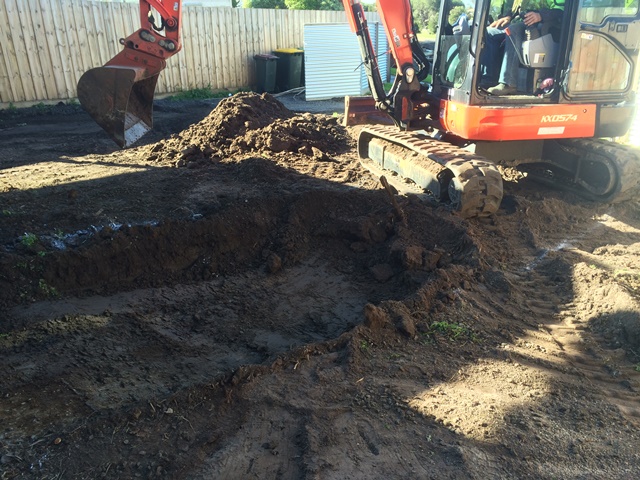 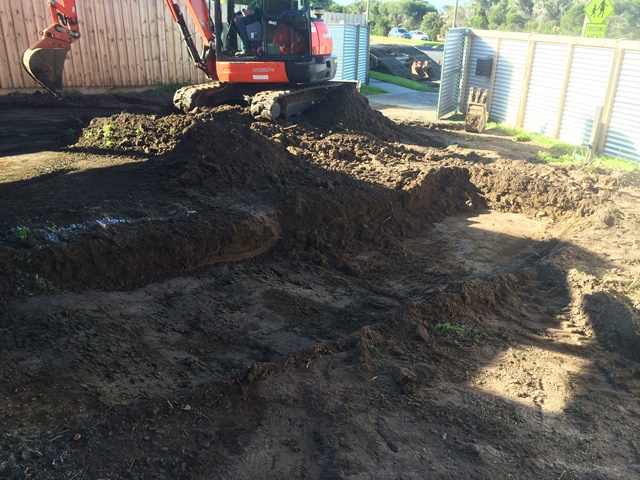 The depth of the trench gradually reached 600mm (2ft) at its deepest point. 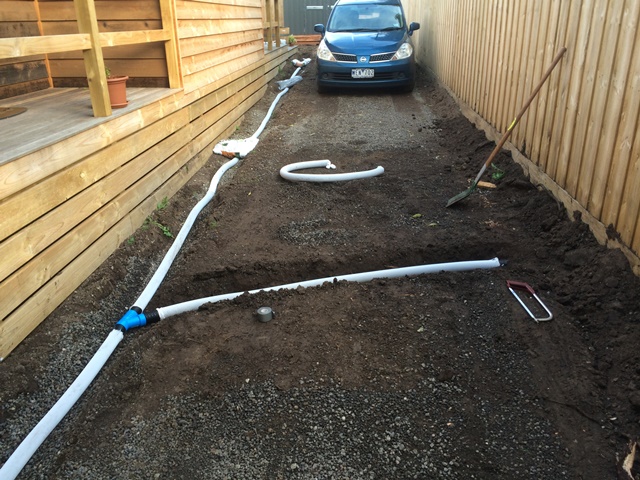 The rain garden is fed by water collected in underground agi pipes across the back and down the side of the residence. 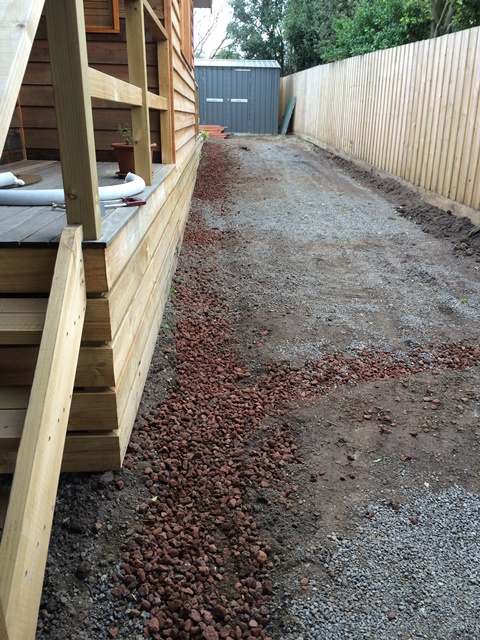 The trenches for the pipe were filled in with scoria 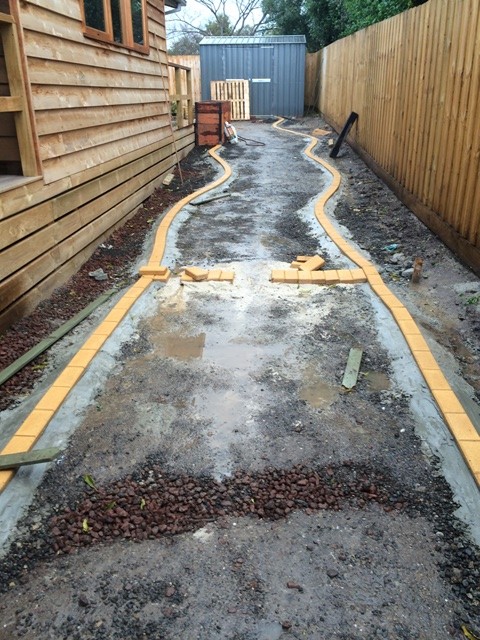 This image shows the agi-pipes at work. The water makes it’s way down the hill and into the trench before being redirected into the rain garden at the front of the property. 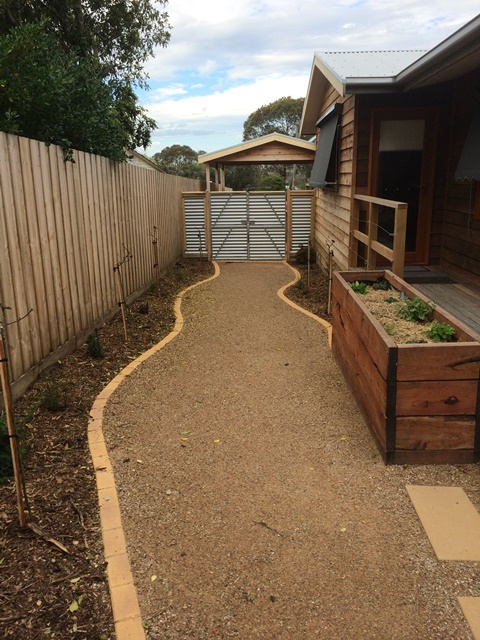 Once covered in toppings and garden beds the drainage system is invisible. 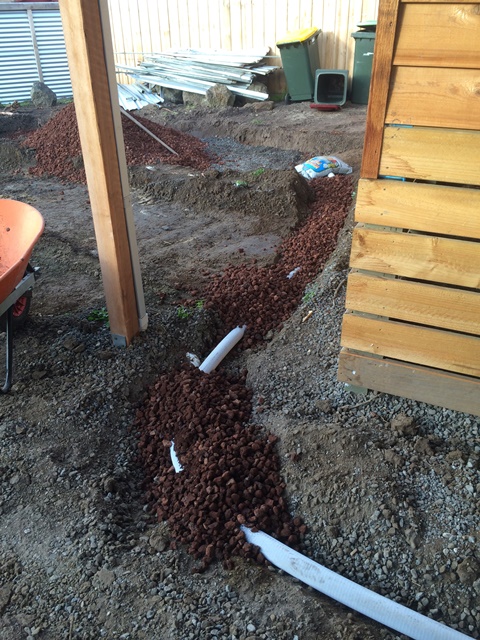 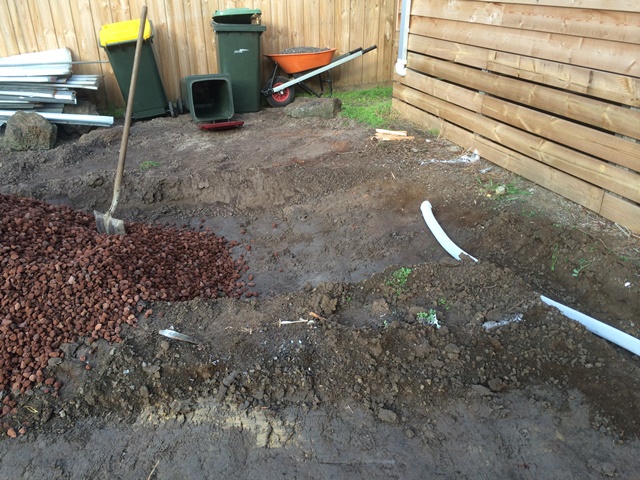 The drainage trench meets up with the main rain garden 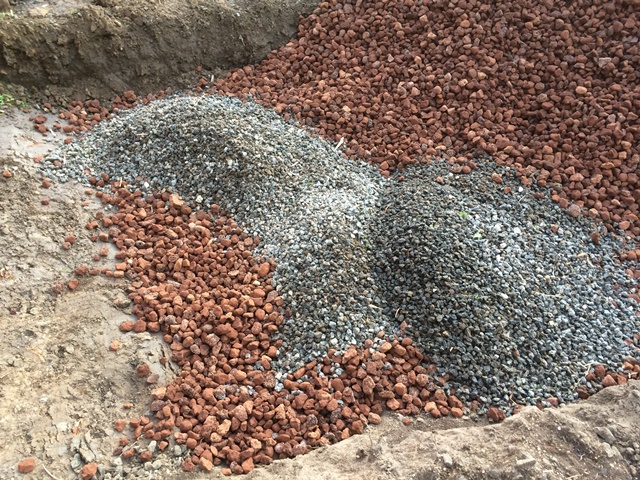 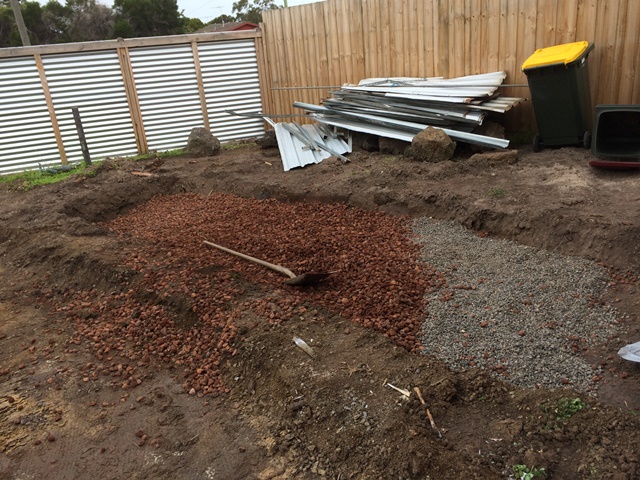 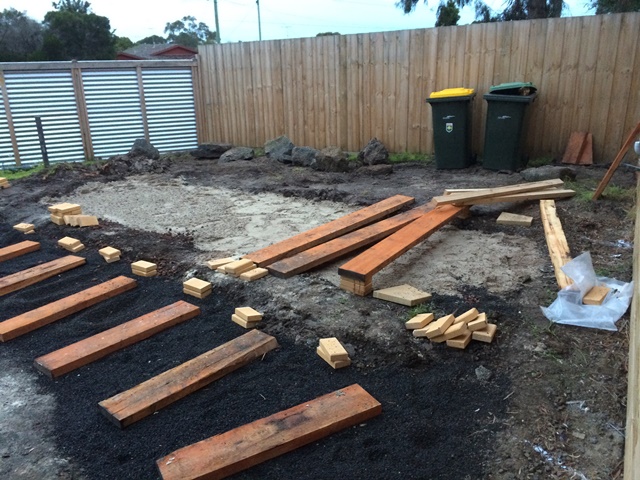 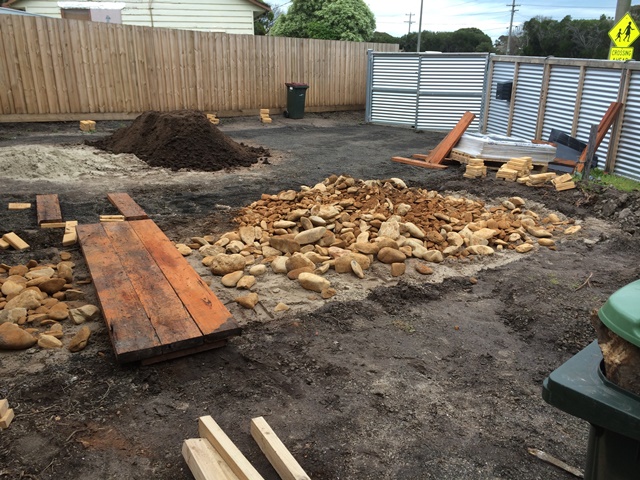 You can use many types of mulch for a rain garden, in this case we were going for a stylised dry river bed and chose washed river stones. 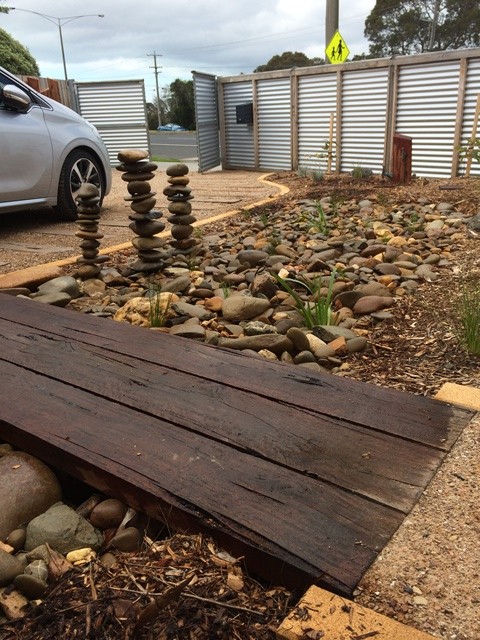 The rain garden was then planted out with native grasses that are tolerant of both drought and inundation. 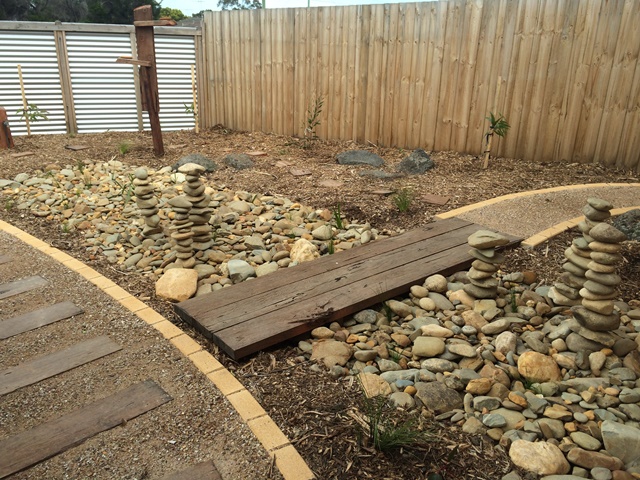 Then we added some sculpture because that’s just fun.

If you want any more information of rain gardens or other ways to use water better in the garden contact us here or via the form below. 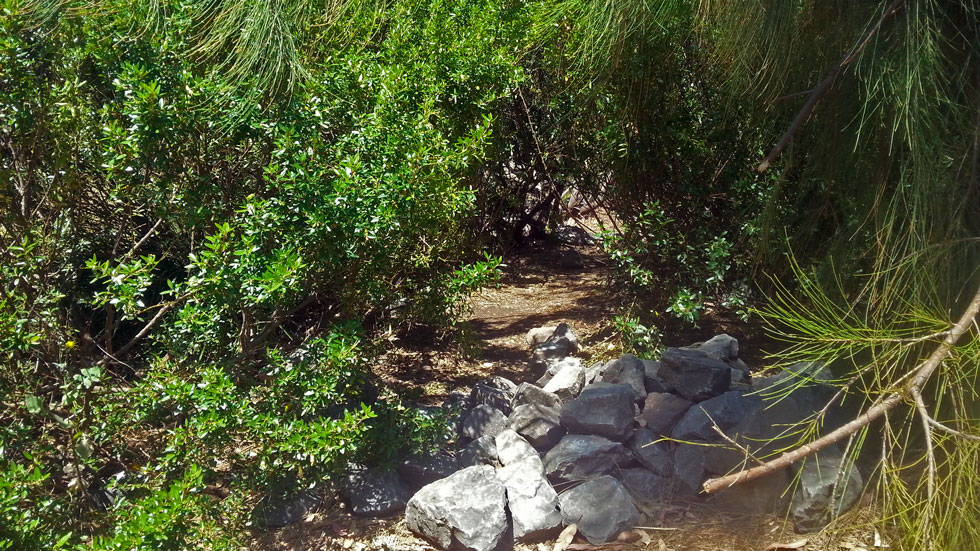 Children’s gardens and spaces for natural play are invaluable. A lot of research and design work goes into creating children’s gardens – two great examples being the Ian Potter Children’s Garden at the Royal Botanic Gardens Melbourne and the play space in Geelong’s Eastern Park.

But these spaces are composed of carefully designed elements, whereas this blog is about how kids can make their own play spaces using garden areas, which is arguably more valuable than a formally designed space.

The best example would be to show how kids play in bush areas, but this is challenging in a predominantly urban environment. The example used here is an excellent children’s playground, found at All Nations Park in Northcote in Melbourne’s inner north. The park itself was built over old landfill and features a number of different areas and functions, but the emphasis here is on the planting that surrounds the lower playground, and how the local kids have turned it into an adventure park with tunnels, forts and a myriad of tracks.

There are two main planted areas around the playground – an embankment that slopes to a lower area (seen above) and a forest of Casuarinas (native She-Oak) that leads into the playground and barbeque area from the southern side of the park.

This simple, mass planting of the Casuarinas has created a shady forest strip that is not only a space to play and run through, but is also a place for forts, camping areas, whatever the imagination of a child can conjure up from an outline of rocks.

[Above – the ‘junior’ section of the playground, with the forest behind. Whatever these rocks represent, they will be in a different form in a day or two.]

It also makes an excellent place for playing tiggy, hide and seek and any number of brand-themed variation of the two.

However this in many ways is large-scale thinking. Whilst a marvellous place, it’s not something that is easy to replicate in a run-of-the-mill backyard. The other spaces here have another story to tell, one that may be entirely accidental from a design perspective but is no less significant. 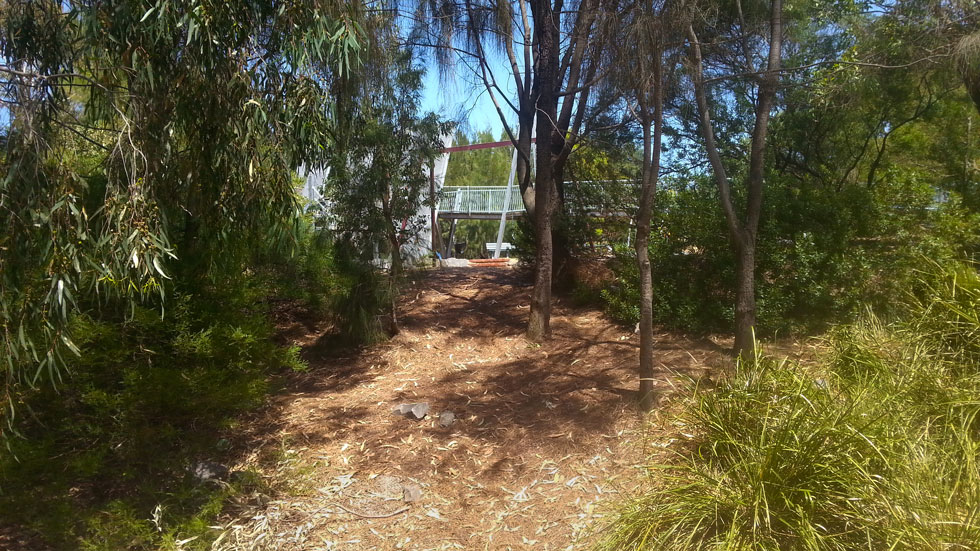 Surrounding the lower area is a collection of native trees & shrubs and a few grasses, and it is the stubborn hardiness of these shrubs that provides spaces for adventure and general old-school children’s mischief.

Littered throughout this space are paths and tunnels, formed over time as kids found spaces to crawl through, fenced areas off with rocks and developed an entirely new play space in a secret world underneath the bushes.

This is a playspace that is away from the adults at the barbeque tables nearby. Down here, the kids rule. They invent places, argue and negotiate rules to games that change every 30 seconds, hurtle through the bush at terrifying speeds for no reason other that it’s fun, and they exist in a world that they’ve invented without anyone telling them how or what or where. 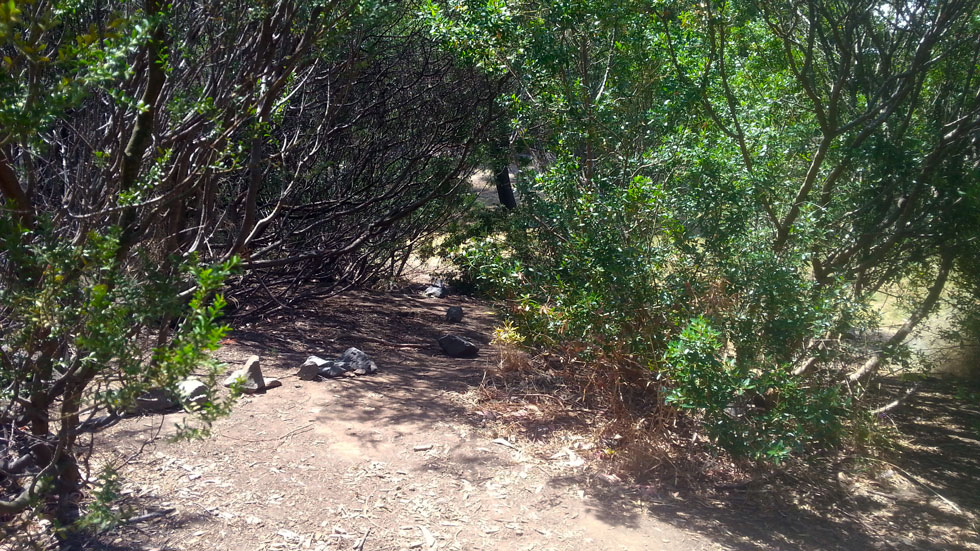 There is endless research undertaken about the significance of kids getting outside and experiencing the natural environment (see here for an American site with further information on children and nature play, or here for a report by  the Victorian Department of Education). The best example you can get though is from watching the way behaviour changes in natural environments – kids are more free with expressing themselves, with sharing their ideas and socialising with kids of different ages groups and backgrounds.

This is on top of research that indicates adults also benefit from natural spaces. Or see here for an article about the benefits of gardening when rehabilitation prisoners after many years behind bars. Outdoor spaces present limitless possibilities, and are increasingly attributed to better health, both physically and psychologically. 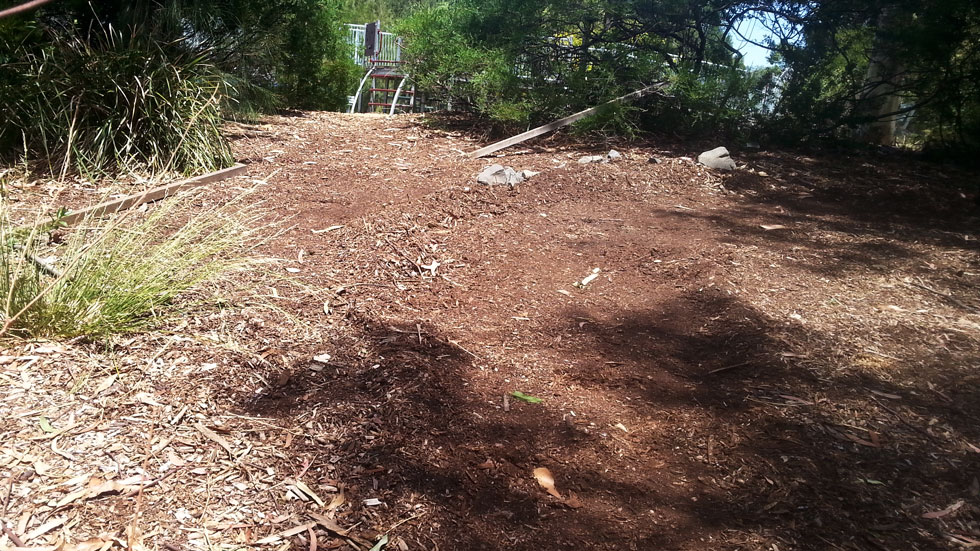 These experiences and this sort of play area can be achieved in a backyard of reasonable size – even careful planting in a smaller space can provide ample opportunity for play. It boils down to choosing the right plants, shaping the ground effectively and an acceptance that, in some spaces, the garden will never be manicured. This example here is large-scale and could provide for 20 to 30 kids when under pressure. A child can turn just a few square metres into something evolving, imaginative and unique if given the chance.

This space is a highly active space. I’ve seen kids here in the super-heat and in the rain, both summer and winter. There’s been occasions when the playground is deserted, and the bushes are alive with squeals and thumping feet. Whether it was intentionally designed in this way, or it evolved over time as kids began exploring, it is spaces like these that can teach us a lot about our own gardens, and the significance of natural spaces and natural play in a child’s life.

If you’d like to develop a garden playspace for children, or are just after some more information, feel free to contact us below.